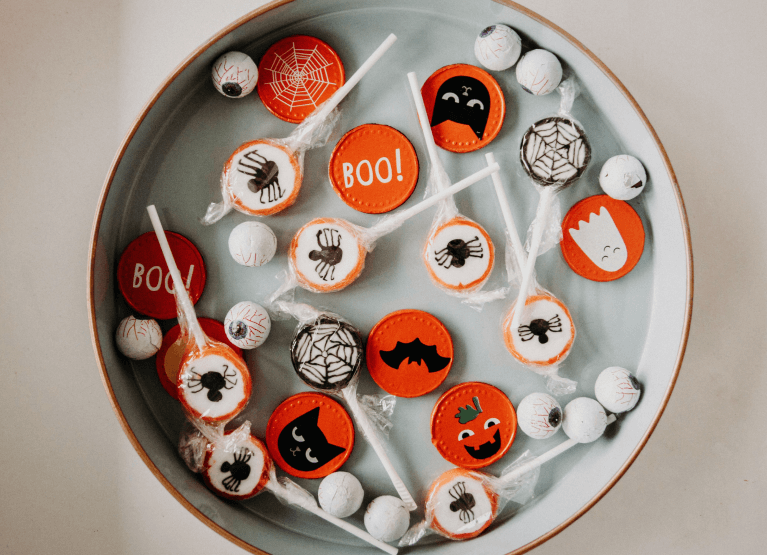 As Halloween approaches, nostalgic images of your favorite childhood (or adulthood!) candy may occupy your mind. This year alone, Americans are likely to fork out nearly three billion dollars on Halloween candy. That equates to roughly three and a half pounds of candy per person eaten during the season.

So, what does that mean for your blood sugar? Well, it depends. Many things can influence how your body responds to sugar intake. These can include:

We’ve told you about Halloween candy and your health, but since the effects of candy can vary for everyone, we decided to put a few of the most popular candies to the test.

This Halloween season, we conducted a few candy experiments with a continuous glucose monitor to take a peek at what might be happening to your glucose levels after you enjoy your favorite treat.

Sugar and Your Health

Excess sugar consumption, especially over longer periods of time, has been linked to increased risk for weight gain, metabolic syndrome, diabetes, and even cavities.

When it comes to added sugar, the American Heart Association recommends the following:

So, with Halloween approaching, how can you enjoy some of your favorite treats without feeling guilty? Let’s take a closer look at the sugar content of some of the most popular candies.

How Much Sugar is in Your Favorite Halloween Candy?

You might already know that most candy delivers a powerful sugar punch. But is one candy better than another?

Unfortunately, the relatively smaller “fun-sized” or “snack sized” packages of some of your favorite treats are no exception. Take a look at the sugar content per serving (fun-sized) of the 10 most popular Halloween candies.

With the growing popularity of keto and low-carb diets, it’s no surprise that we see more candy and sweets options labeled as “sugar-free.” But have you ever wondered what sugar-free really means and what counts as “sugar-free”?

Sugar-free sweeteners are often called artificial sweeteners or sugar substitutes. Sugar substitutes approved for use in the U.S. and Europe include stevia, acesulfame-K, aspartame, neotame, saccharin, and sucralose.

Though many studies have confirmed the safety of these products, other studies continue to explore potential negative effects. Some research, for example, has indicated a potential link between artificial sweeteners and an increased risk for cardiovascular disease.

There are also other alternative sweeteners out there to choose from, including allulose, monk fruit, and sugar alcohols or polyols such as erythritol. Research on many of these compounds is still unfolding.

Frequent and repeated blood sugar spikes can have unwanted health effects over time, and may contribute to an increased risk of type 2 diabetes. That’s why it’s helpful to understand how sugar affects your individual health and know what lifestyle habits can help blunt these spikes.

With Halloween approaching, Nutrisense content writer Natalie Krafft decided to test out a few different candies using a CGM. In her experiment, she tested three types of candy to see how her blood sugar responded after being sedentary and after going on a walk.

Natalie tested Sour Patch Kids, Reese’s cups, and Diablo sugar-free gummy bears, and ensured that she ate similar serving sizes with a nearly identical carbohydrate content. Her goal was to determine whether some candies are better than others, and if sugar-free candies would actually be better for glucose.

Let’s take a look at her results.

For the first experiment, Natalie ate one serving of Sour Patch Kids during the afternoon and didn’t do any sort of exercise for the two hours after eating. She also refrained from eating any other food during this time.

Below, you can see the significant spike in Natalie’s blood sugar after eating this sugary candy.

The following day, she conducted the same experiment: she ate one serving of Sour Patch Kids, followed by a 30 minute, moderate intensity walk. Here’s what her blood sugar looked like after two hours. As you can see, the candy still led to a spike, however, it took longer to reach its peak when paired with exercise.

Taking a look at these two experiments above, the first thing I notice is that the overall glucose score for the snack was similar on both days, even though the individual metrics that made up that score might have been a little different.

In the experiment where Natalie ate the Sour Patch Kids without exercise, her glucose peak was about 10 points higher than the test with exercise alongside. This makes sense, as we know that exercise can help the body process incoming glucose more efficiently.

I also want to look at the AUC and Delta scores, which tell me more about Natalie’s specific glucose response and how long glucose stays elevated. AUC is the area under the curve and tells us the extent of exposure to a certain glucose level within a set time frame after a meal. We are typically aiming for an AUC of 25 or less.

Natalie’s AUC was 45.9 without exercise and 43.5 with exercise. So we can see some small improvements there with the exercise in the picture, although the glucose response in both cases was higher than we would like.

Delta is how much your glucose level changes in the 2-hour window after beginning your meal. We are typically looking for a score of 30 or less. Natalie’s Delta was around 54 without exercise and around 44 with exercise. Again, both are not ideal, but the exercise definitely improved the score.

I can also take a look at how long it took for her glucose to come back down after eating. This is considered the recovery score. Here I am looking for a smaller number and ideally want to see glucose return to baseline within two to three hours. I see that Natalie’s recovery score was actually much worse with the exercise than without it. What was going on there?

Exercise can impact glucose response in many different ways, depending on the person and the context. Sometimes exercise can itself cause a temporary rise in glucose as a result of changes in hormones such as cortisol that rise during some types of exercise. Perhaps small changes in Natalie’s stress response contributed to how her body perceived the stress of her moderate intensity exercise.

What we do see with Natalie’s exercise is that after the relatively extended glucose elevation, her glucose does drop lower than it did on the other side of the elevation without the exercise. This tells me that the exercise overall likely helped her body process that glucose more efficiently through the coming hours, even if the exercise itself may have contributed to an extended elevation temporarily.

This Halloween, find out what candy you can treat yourself to without ruining your long-term health goals.

For Natalie’s second experiment, she opted for a “mixed macronutrient” candy, with sources of carbs, fat, and protein. She made sure to keep the carbohydrate content as consistent as possible to the Sour Patch Kids candies.
Here’s what her blood sugar looked like two hours after eating the Reese’s Peanut Butter Cups, peaking at 98 mg/dL.

The next day, Natalie ate the same serving size of Reese’s, but this time she went on a 30 minute walk afterwards. Here, you can see a slightly smaller spike in glucose, which peaked at 93 mg/dL. Although Natalie exercised after eating the Reese’s cups, her response was not much different than the first day.

Wow! We can definitely already see a difference in the quality of Natalie’s glucose response here compared to the Sour Patch Kids. Experimenting with what is roughly the same amount of sugar in both the Reese’s and the Sour Patch Kids allows us to consider other variables (aside from the sugar amount) that could have impacted this response.

We know that a mixed macro snack or meal that includes some protein along with carbs may help modulate and even blunt a glucose response compared to eating carbs on their own. Her overall meal score in both cases was excellent, though the Reese’s paired with the exercise did result in a slightly lower peak.

Finally, Natalie tried a brand of sugar-free gummy bear candies that are sweetened with stevia. On the first afternoon, she ate half of the package (about 17 pieces)

The next day, Natalie ate the same amount of gummies and went for a 30 minute walk immediately after. Below, you can see her interesting blood sugar response. Her levels went down slightly after eating the gummies, and then rose and remained consistently at 93 mg/dL for the next three hours before dropping back down.

The alternative sweeteners like stevia may impact everyone a little differently. That’s why it’s really great to be able to see this glucose response happening in real time. What I see for Natalie is that her glucose response was definitely lower with these stevia-sweetened gummy bears than it was for both of the previous candies.

In some cases, even though these sweeteners may be considered to have zero grams of sugar, the body may still have what we think of as a “cephalic phase response” to the sweetness or even just the anticipation of food itself. This generally means that the sweet taste or conditioned food anticipation response may trigger a release of insulin, even in the absence of carbs specifically.

This can sometimes cause a bit of hypoglycemia, since the body will release insulin in the absence of higher carbs - causing the body to “soak up” what little glucose might have been hanging around in the blood to begin with. If we pair that with more exercise - which is also going to hasten the transport of glucose from the blood into the cells - we can see even more hypoglycemia tendency.

That’s what I think happened there for Natalie during her exercise experiment. The rise in glucose we see after that initial drop could have had more to do with the reactive rise in cortisol triggered from the drop in glucose as a form of stress response as well as the exercise-induced stress-related cortisol elevation we mentioned earlier.

When it comes to candy, it appears that opting for mixed-macro options with protein, fat, and carbs may be best for your blood sugar response.

If you want to enjoy some sweet treats this Halloween while keeping your blood sugar levels steady, here are some best practices you may want to keep in mind. How to Get Started on a Plant-Based Diet